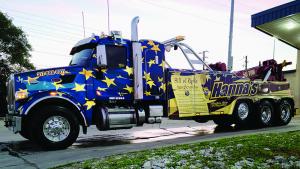 Hanna’s Wrecker’s winning truck with the Bill of Rights

Hanna’s Wrecker’s twin tow trucks with patriotic designs (left) the first page of the U.S. Constitution and (right) the Bill of Rights.

The 13-year old company, based in Indianapolis, covered its Peterbilt 567 truck chassis and 50-ton Vulcan towing unit with a vinyl wrap featuring stars on a blue background and the Bill of Rights. Company owner Anthony Hanna says the tow truck is a head-turner.

"Everybody loves the trucks. ," says Hanna, who added it's the first time the company has participated in the Shine 'n Star contest. "I just want to represent America. A lot of people have American flags on their trucks, but nobody has done the Bill of Rights." The patriotism at Hanna's Wrecker runs deep. Another of the company's tow trucks boasts the first page of the U.S. Constitution. "We want people to remember our name."

The company may be hard to forget since Hanna's Wrecker, which has a total of 26 tow trucks, has more patriotic-themed trucks planned for 2022. For its Grand Prize the company receives a cash prize of $1,000, a commemorative plaque, and a cover feature in Tow Times magazine.

Hanna's Wrecker's tow truck may be the headliner in the 2021 tow truck photo beauty contest, but six other towing companies from around the country walked away with First Place prizes for the designs on their tow trucks, ranging from light- to heavy-duty trucks plus car carrier, working truck and rotator categories. In addition, 12 companies earned Second Place and Third Place prizes.

The tow trucks are judged by an independent panel based 40% on overall appearance, 30% on execution of graphics, and 30% on design/originality of color and graphic design. Each year hundreds of companies from the U.S. and Canada send their entries into the tow truck contest.

This year's First Place winners, which are eligible for $400 cash, the winner’s photo on a 2021 or 2022 Tow Times cover, and commemorative plaque, include:
• Green's Towing & Recovery, Burgettstown, PA, for its light-duty tow truck entry.
• Priority Wrecker service, Batavia, IL, in the medium-duty truck category.
• Hendrickson's Recovery Team of Idaho Falls, for its heavy-duty truck.
• Canton Towing, Canton, OH, for its rotator truck, a new category in this year's contest.
• Dirty South Towing, Hartselle, AL, for a car carrier truck.
• Jinks Towing & Recovery, Midlothian, VA, for a working truck with over 150,000 miles.

See the November issue of Tow Times magazine for an 8-page spread on all the Shine 'n Star winners. The 2022 Shine 'n Star tow truck photo beauty contest will kick off in the spring.