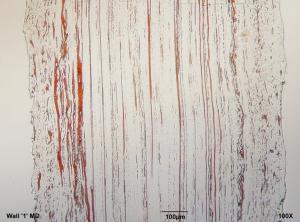 Microphotograph of iodine stained Kortrax in a Plastic Bottle

IRVINE, CA, US, March 8, 2021 /EINPresswire.com/ — On 3.5.21 the EPA issued a Public Announcement regarding, “Testing Data Showing PFAS Contamination from Fluorinated Containers.” In its Announcement the EPA, “is encouraging the pesticide industry to explore alternative packaging options, like steel drums or non-fluorinated HDPE.”

In its 3.5.21 Public Announcement, the EPA stated that in January 2021 it continued testing on fluorinated HDPE containers and determined that PFAS compounds were most likely formed from a chemical reaction during the container fluorination process which then leached into the product. Specifically, the EPA confirmed that “that it has detected eight different PFAS (sic) from the fluorinated HDPE containers, with levels ranging from 20-50 parts per billion.”
EPA is aware that many companies are using fluorinated HDPE containers to store and distribute pesticide and other products. EPA is actively working with the Food and Drug Administration, the U.S. Department of Agriculture, and industry and trade organizations to raise awareness of this emerging issue and discuss expectations of product stewardship. Moreover, the EPA has issued a subpoena under TSCA authority to the company that fluorinates HDPE containers to learn more about the fluorination process.

The EPA is also “testing different brands of fluorinated containers to determine whether they contain and/or leach PFAS, and if so, learn the conditions affecting leaching.”

Kortrax® is an engineered polyamide barrier resin that when blended with HDPE is used in the manufacturing of plastic containers (aka Baritainers®) with barrier properties that HDPE alone cannot provide. Kortrax® imparts the chemical resistance associated with a fluoropolymer treatment of HDPE containers and adds the benefit of oxygen, carbon dioxide and water vapor permeation inhibition as well. (https://baritainer.com/)

Fluorine or fluorine compounds are not utilized when Kortrax® is included within HDPE containers, and recent analysis has not identified any PFAS, PFOS compounds in containers or filling goods stored in Kortrax®/HDPE constructed packages. None of the ingredients of Kortrax® have been identified as being on the list of OECD PFAS, PFOS precursors. And Kortrax® is FDA and EU compliant with recycle code 2. (https://baritainer.com/technology/)

The usage of Baritainers® constructed from Kortrax® and HDPE offer a human safe and an environmentally recyclable alternative to fluorinated containers for food, consumer, and industrial applications. BP Polymers continues to monitor the PFAS, PFOS situation and will offer safe, alternative solutions for packaging foods, fragrances, cosmetics, health and beauty, pharmaceuticals, pesticides, solvents, and other critical chemicals.