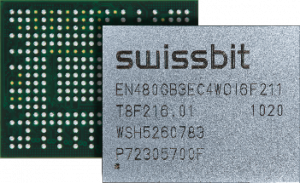 The NVMe protocol has been designed to efficiently use the bandwidth with a native nonvolatile memory command set resulting in ultra-low latency.
EN-20 offers a high performance, high reliability, cost efficient, true industrial SSD in a single BGA chip with up to 1 DWPD endurance. For even higher endurance requirements, EN-26 in full pSLC mode provides a 10-fold endurance.

EN-20 has already been successfully qualified by key industrial customers and is currently available with densities from 15 GB to 240 GB in the TLC version and with 5 GB to 80GB for EN-26. An extension to 480 / 160 GB will follow later this year.

The small size and integrated metal heat spreader allows the use of EN-20 not just as a single BGA device but also on a variety of m.2 module form factors from a tiny 2230 length to the standard 2280 variant. EN-20 also powers the soon to be introduced Swissbit G-20 CFexpress™ cards with the same extensive feature set.